Junior doctors are so overworked and exhausted they fear making a mistake that could harm their patients or themselves, with the trainee medicos delivering a withering assessment of some of Sydney's biggest hospitals for failing to protect them from bullying and discrimination.

The latest Hospital Health Check survey of NSW doctors-in-training raises serious concerns for the welfare of both the junior clinicians and the people they treat. 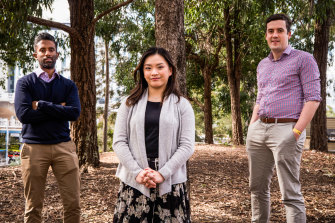 When it comes to intimidation, patients are the most likely aggressors – a troubling dynamic that has only intensified during the COVID-19 pandemic, doctor-in-training leaders say.

Roughly 30 per cent of trainee doctors felt unsafe at work due to verbal or physical intimidation, according to the survey of 1332 junior doctors in NSW compiled by the Australian Medical Association NSW’s Doctors in Training Committee.

Of 360 doctors who were intimidated, all but four said patients were the source.

Sanjay Hettige, co-chair of the committee, said junior doctors were increasingly subjected to threats and intimidation by patients in emergency departments and wards amid the COVID-19 pandemic.

"I understand there’s heightened anxiety in hospitals among patients during COVID, but please don’t take it out on healthcare workers," Dr Hettige said.

"Junior doctors are on the frontlines working as hard as possible and we need a safe work environment to look after our patients," he said.

Yvonne Nguyen, a first-year psychiatry trainee in south-eastern Sydney, said smaller-statured and younger female doctors were the most likely targets.

“Patients were often more nasty to me than male doctors, I believe because I was less of a physical threat and an easier target,” Dr Nguyen said.

The survey found more than half of trainee doctors reported being worried they were so fatigued due to their long hours they would make some medical error.

"That is a really concerning statistic," Dr Nguyen said. "We’re talking about a really large group of doctors saying they’re so tired they’ll make a mistake [that could harm a patient]."

A total of 44 per cent were concerned about the effects of fatigue on their own personal health and safety, echoing anecdotal reports of trainees crashing their cars after long shifts, the survey found.

"This is absolutely unacceptable," Dr Nguyen said, recalling that she had been told by patients to "go back to China".

"It’s quite common and frustrating to work in an environment where patients say things like 'you people are taking over the country' … or request to see another doctor because of your appearance," she said.

Female trainees fared worse on almost every domain covered by the survey.

With Australian and international research showing female doctors were at greater risk of psychological distress, burnout, and suicide, Dr Nguyen said, "this is something we have to seriously focus on to keep our doctors and patients safe".

The Hospital Health Check results showed some encouraging signs of improvement. More than half the state’s hospitals were awarded overall Bs for the first time in the survey’s four-year run, largely due to the higher scores for fair rostering and overtime, and an 8 percentage-point drop in the proportion reporting bullying.

The committee credited concerted lobbying for widening the types of duties that can be claimed as unrostered overtime and the ministry’s Junior Medical Officer support plan launched in response to a rash of trainee doctor suicides.

But most of the state’s hospitals were still failing their junior medical staff when it came to discrimination, harassment, and intimidation and ensuring they were safe when they came to work and once their shifts ended.

Blacktown Hospital was graded the worst in the state, and the only hospital to be graded an overall D-grade, as well as two Fs – for wellbeing and access to leave - and Ds for education and training, and morale and culture.

Across all 34 NSW hospitals with enough respondents to be included in the report, the average overall grade was a C and D for wellbeing.

Hornsby was the only Sydney hospital to score an overall A grade and a B for wellbeing – the highest grade awarded to any hospital in this category.

In a significant win for the junior medical workforce, the percentage of doctors-in-training claiming all of their unrostered overtime has increased from 16 per cent in 2018 to 38 per cent this year.

Strikingly, women in surgical training were now more likely to claim all their overtime than men, when in 2019 they were twice as likely to claim none of their unrostered overtime.

But across all other specialty training, women still trail men in claiming overtime, with 45 per cent of men claiming all their overtime in 2020 compared to 33 per cent of women.