Eligibility and Protection Against Unfair Dismissal

What is the point of unfair dismissal laws?

The aim of the unfair dismissal provisions in the FW Act is to balance the rights of employees to be protected from unfair dismissal, with the need for employers, particularly small business, to fairly and efficiently manage their workforce.

Whilst there are eligibility requirements which apply for an employee to access the unfair dismissal protection under the FW Act, approximately 80% of employees in Australia will be eligible to make an unfair dismissal application to the FWC.

Employees will be eligible to make an unfair dismissal claim under the FW Act where they have been dismissed and:

If you have a workplace issue, including a potential unfair dismissal, workplace bullying or harassment issue arising from your current or past employment, please give Workers First a call to discuss your situation and options, FREE and confidentially.

A LOGANHOLME medical practice has been fined $51,000 for subjecting an Indian trained doctor to treatment which a judge described as "appalling."


The centre, called Windaroo Medical Surgery Pty Ltd, which is located at Loganholme Shopping Village was fined  $39,600 in the Federal Circuit Court for threatening a doctor and trying to coerce him into withdrawing a complaint he made to the Fair Work Ombudsman.
Company director Dr Sheila Pathmanathan has also been penalised $7920 for her part in the threat and cutting-off the doctor's pay and fellow director Dr Tan Thi Thanh Tran has been fined $3960 for making threats to the doctor.
The Court also ordered Windaroo Medical Surgery and Dr Pathmanathan to jointly pay $24,724 in compensation to the doctor for economic loss and distress suffered.

Acting Fair Work Ombudsman Michael Campbell says the outcome of the matter sends a message that retaliating against a worker simply for exercising a workplace right is serious conduct that will not be tolerated.
"It is completely unacceptable and unlawful for an organisation to seek retribution because a worker has exercised their legal right to lodge a complaint with the Fair Work Ombudsman," Mr Campbell said.
"We will not hesitate to take enforcement action against any organisation that unlawfully threatens and coerces workers."
The Indian doctor came to Australia in 2009 on a medical practitioner visa to work at Windaroo Medical Surgery, according to the Fair Work Ombudsman and lodged a complaint with the Ombudsman in December that year after a dispute with the company.
Judge Michael Jarrett found that Dr Pathmanathan, Dr Tran and Windaroo breached a coercion provision of the Fair Work Act in February, 2010 by threatening the doctor that he would not be paid unless he withdrew his complaint.
Judge Jarrett also found that Windaroo and Dr Pathmanathan took unlawful adverse action against the doctor by ceasing payments to him a month later, after he refused to withdraw the complaint.
The doctor resigned in May, 2010 and returned to India with his young family.
Judge Jarrett described the treatment of the doctor as "appalling" and found that it had caused him distress.
Judge Jarrett said Windaroo, Dr Pathmanathan and Dr Tran knew the doctor was in "significant financial difficulty" and that withholding payments from him would "add to his financial distress".
"It was done either in the hope that (the doctor) would relent and withdraw his complaint, or as punishment for not succumbing to the earlier coercion," Judge Jarrett said.
Judge Jarrett described the attempt to coerce the doctor as a gross contravention of the law.
"It is not difficult to infer that the contravention was designed with the explicit intent of avoiding scrutiny by the regulatory authority.
"The contraventions were clearly a deliberate attempt to deprive (the doctor) of his right to bring a complaint to the Fair Work Ombudsman and his right to payments under the contract for services he had with the first respondent."
Judge Jarrett found that there had been "no expressions of regret or remorse" from Windaroo, Dr Pathmanathan and Dr Tran.*
If you have a workplace bullying or harassment issue arising from your workplace, please give Workers First a call to discuss your situation and options FREE and confidentially.

Workers - Self Inflicted Injuries and Insanity


Under s 129 of the Industrial Relations Act 1999 (Qld), compensation is not payable for an injury sustained by work if the injury is intentionally self-inflicted.

The question then is if a worker is so psychiatrically or psychologically traumatised so as to commit suicide, can the worker’s dependant or dependants claim compensation?

In that case his Honour accepted that, following the Court of Appeal in New South Wales decision in Holden Pty Ltd v Walsh (2000) 19 NSWCCR 629; [2000] NSWCA 87; BC200002008, where the legislative scheme requires a causal nexus between the employment and an injury by way of death, the chain of causation will be broken if death is the consequence of intentionally inflicted harm.

However, his Honour also accepted in reliance upon that case that suicide while deliberate may often (but not always) be the product of a will so overborne or influenced by the worker’s circumstances that it should not be regarded as an intentional act breaking the chain of causation. Insanity is not a necessary step to this result.

Craig’s case was referred to and followed by Deputy President O’Connor in O’Neill v Q Comp (WC/2012/84 — 5 September 2013).
In that case, the deceased worker was a medical practitioner who injected himself with a drug called rocuronium and thus committed suicide.
If you have a workplace bullying or harassment issue arising from your workplace, please give Workers First a call to discuss your situation and options FREE and confidentially.

Article sourced from Lexis.com
Posted by Workers FIrst at 08:55 No comments:

The Supreme Court of Australian Capital Territory (ACTSC) has refused to dissolve the injunctions it previously made against a detrimental action committed by the board of directors of The Brumbies against its Chief Executive Officer (CEO), allegedly for making public interest disclosures regarding certain commercial arrangements.

The ACTSC ruled that the decision of the board showed, to the relevant degree, that it was taken because of the public interest disclosures made by the CEO, at least as a dominant factor.

If you have a workplace bullying or harassment issue arising from your workplace, please give Workers First a call to discuss your situation and options FREE and confidentially.

Posted by Workers FIrst at 10:32 No comments:

Interesting extract we found in an article this evening. Seems to confirm our theory on the union movements tragic devotion to a model that fails to service union members. 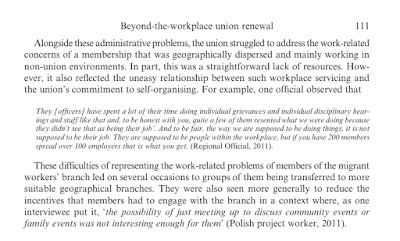 If you need assistance with a workplace issue, contact Workers First immediately for a FREE consultation.

Posted by Workers FIrst at 22:36 No comments:

A woman has failed in seeking damages against AMP Capital Investors Ltd, ThyssenKrupp Elevator Australia Pty Ltd and ISS Integrated Services Pty Ltd, for injuries she allegedly sustained when she tripped upon exiting a lift in a building where the respondents had relevant capacities.

The New South Wales Supreme Court, in finding that none of the respondents were liable, dismissed all cross-claims filed between and among them because neither party to the cross-claims were tortfeasors and no occasion arose for ordering contribution or indemnity.*

The Australian Prison Officers Association and Workers First will be in Townsville on 11 May 2016 to meet with Prison Officers to discuss local concerns and share information passed on from members in the southern States including Victoria and New South Wales.
Brian Newman said "this is a very exciting time for the APOA and Workers First as all the hard work starts seeing our respective membership grow and prosper".
To arrange a private consultation with Brian, email gethelp@workersfirst.com.au.
www.workersfirst.com.au | 0738073807| gethelp@workersfirst.com.au 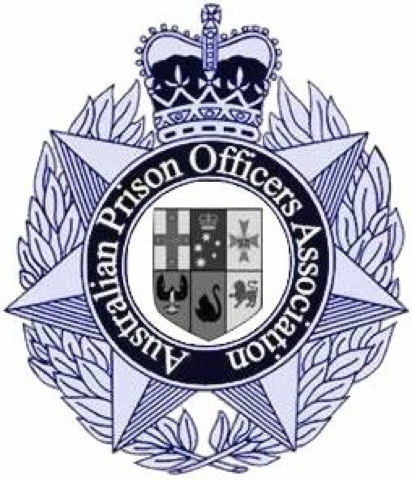 Posted by Workers FIrst at 21:56 No comments:

Have you ever asked yourself what portion of a union official's pay is lost when they are out in the workplaces advocating for strikes?

Posted by Workers FIrst at 06:56 No comments:

Where are we today? 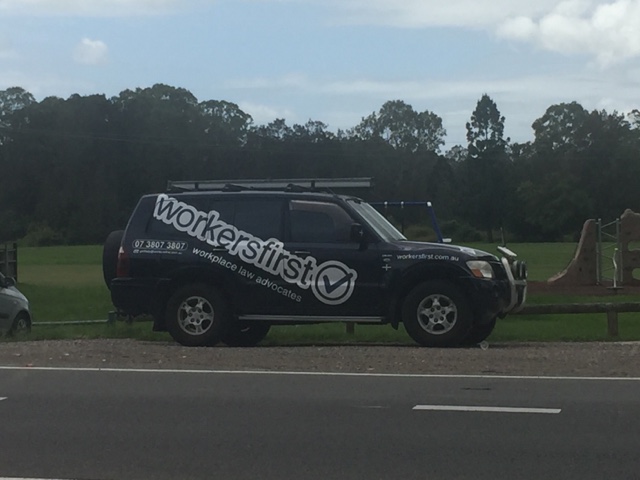 Tell us where we are parked today and win a FREE Workers First cap.
Posted by Workers FIrst at 11:26 No comments:

Give yourself a pay rise and a fighting chance when you need it most.
Most pay rises are less than the average cost of an annual union membership.
#joinworkersfirst #joinapoa #joinqpoa #workersfirst #apoa #qpoa #prisonofficers #unionmembership
Posted by Workers FIrst at 07:07 No comments:

Do you every wonder where all your union fees go?
That is to say, the remaining 14% of Australian workers who still belong to union.
Read the final report of the recent Trade Union Royal Commission.
Forget the hype, read the evidence and start asking questions.
Need help with a workplace matter but not in a union or simply not getting the service you need?
gethelp@workersfirst.com.au 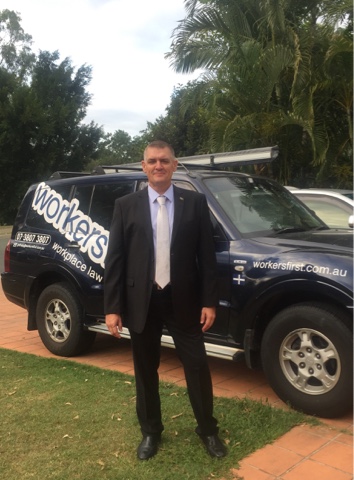 Posted by Workers FIrst at 07:02 No comments:

Townsville Prison Officers Get a Visit 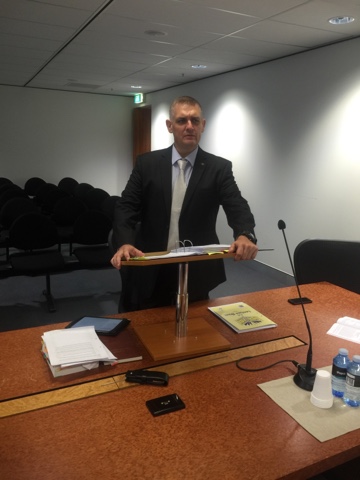 18 March 2016 Workers First Director Brian Newman will be in Townsville meeting with Prison Officers and fielding concerns about current issues within the Prison.
If you need a confidential meeting with Brian during this visit, email gethelp@workersfirst.com.au or call us on 0738073807.
Join today for just $2 a day and enjoy the peace of mind that you'll have the Workers First Ultimate Membership.
Posted by Workers FIrst at 07:36 No comments: 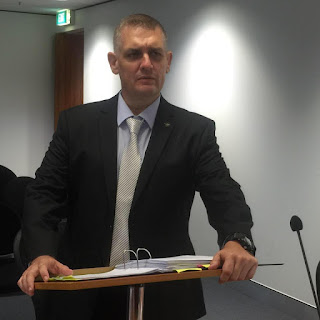 The Maritime Union of Australia (MUA) and Patrick Stevedores Holdings (Patrick) have been on a negotiation process for a new agreement for port operations. During the negotiations, the union obtained authorisation for protected industrial action.
Patrick applied for a suspension of the protected action stating among others that the suspension would be beneficial for the negotiation process. An order for suspension was granted, finding that it reflects a deterioration in the negotiation process. On appeal, the Full Bench found that there was an incorrect factual conclusion.
The Commission found that elevation of hostilities had not precluded negotiation, stating it was still on-going despite the industrial action. Patrick had not cancelled the negotiation process and that key managers were not precluded from attending the bargaining.
Read the full text of the court's judgment here: The Maritime Union of Australia v Patrick Stevedores Holdings Pty Ltd [2016] FWCFB 711.
Workplace issue? Call Workers First ...
gethelp@workersfirst.com.au | 07 3807 3807 | www.workersfirst.com.au

Posted by Workers FIrst at 18:31 No comments: